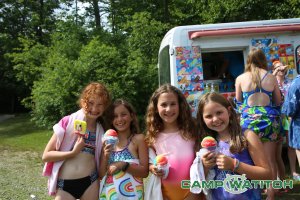 What an amazing week it has been here in Becket!! We have had THE MOST incredible fun every day!! This week ended our very busy intercamp schedule and we planned for some good ol’ spontaneous surprises.

Sunday night was our annual Costume Social! The Leadership Team dressed up in a basketball theme to honor the 50th Anniversary of Watitoh Gardens! The campers were very creative with their homemade costumes and had a great night in the Social Hall! 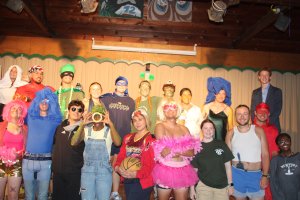 Monday, we surprised camp with another late sleep which was very welcomed!!! Monday night was a camp favorite called Pageant. The campers are separated by coed age groups and had to dress up two of their counselors in a theme. Sharpay and Troy took first place but not without a fight from “Max and Babs,”

Tuesday was a fantastic “Watitoh day!” Our TICS spent the morning at a soccer tournament at Camp Danbee while our 5th grade girls had a blast at Romaca!  Tuesday Night was Watitoh Derby…in the Hockey Arena! The new location from last summer kick started a new tradition that everyone loves. Campers and counselors had the opportunity to act like horses and race each other. Everyone had the chance to bet on the “horses” that they thought had the best odds! It was a very interactive and exciting night with special Night Bite in the Archery Range.
Wednesday was SO MUCH FUN! We had a regular program morning followed by a SURPRISE luau party! An ice cream truck appeared at the waterfront, games were setup, and a coed general swim filled the afternoon. It was a great break from the routine. That night, the girls had MTV Night with incredible performances by all the campers. Cayuga placed first, Onondaga second, and the 2021 winners of Narragansett placed 3rd. It was an awesome dance party in the Social Hall. At the same time, the Boys had Hunt the Counselor!! Dressed in all black, the counselors hid around camp and the boys tried to find them. Each counselor is a different points value…some are positive points and some worth negative. Braedan, a member of our maintenance team, won the whole thing! It was epic!

Thursday was the ever popular trip to Boston. Upper Senior Boys and Girls and the TICS had a great day at touring Harvard, going on a Duck Tour, and eating lunch outside of Quincy Market. What would a day in Boston be like without a stop to Newberry Street! Our itinerary was all outside so that we could enjoy the city in the safest way possible. The kids had a blast! Thursday night was a welcome movie night for the rest of camp and some good R&R!

Friday was Pan Am Day on the boys side.  A one day color war, three teams — Chile, Argentina and Brazil competed in sports, a Bucket Brigade and even a mini Apache Relay!  In the end Chile was victorious!   Friday night was our weekly campfire with our continuing education about the Native American tribes represented at camp. We also had some great performances by some of our campers and staff as well as repeat-after-me songs by Greg and Jayden. Night Bite was the ever popular s’mores!

Saturday, we welcomed over 20 prospective campers for a very successful Dream Day! We can’t wait to see some of those campers next summer! Saturday night was a special night as we watched so many of our awesome staff perform at the Staff Talent Show. Singing, Irish dancing, The Little Mermaid performed by our Waterfront staff, musical performances, a tortilla challenge, and more…we are lucky to have so many talented staff!

Today was an awesome end to Week 5! This morning, we learned all about Project Morry, a year-round youth development program for under-resourced kids with a summer camp experience. We talked about what it means to be given the gift of camp and being able to raise money to send more kids to camp who may not otherwise afford to go. The campers participated in a water carnival where they swam “laps” to raise money. Stay tuned for more information about donating to Project Morry by sponsoring your camper’s laps today.  To learn more about this inspiring organization, visit their website: https://projectmorry.org/. This afternoon was our annual Carnival!! Inflatables, games, face painting, prizes, cotton candy, and snow cones made this event unforgettable!

All week there has been mystery in the air with Color War and lots of Special Events looming. Fake breaks, strange happenings, and schedule changes have all added to the allure of what’s to come! Stay tuned for the many exciting things ahead…Sports-a-Rama Track Meet, Watitoh Gardens, Memory Lane, Campfires, and more…Who knows? Color War might break sometime too!!