Originally known locally as Turner Farm, the Watitoh campus and the adjoining parcel across Route 8 was the home of Henry and Sarah Turner and their descendants. In the early 1900’s, residents of Springfield and other surrounding areas would travel by train to Becket for the rest and relaxation afforded by the guest house and healthful natural surroundings at “Turner’s.”

The first attempt at operating a children’s camp on the site occurred in 1925 when Dr. Arthur J. Logie and partners rented the lakeside parcel and built a small camp for boys that they named Camp Tekoa. Tekoa only operated for a few seasons, an unfortunate victim of the 1929 stock market crash; however several of the original buildings including the current Office and Dining Hall (with the name Tekoa carved on the doorposts) still survive to this day.

In 1936, Henry and Babette DeSola Mendes of New York purchased the property and re-opened the camp as Watitoh the following year. The Mendes family enjoyed great success at Watitoh during the 1940’s and remained there until 1952, eventually owning Blantyre Castle in Lenox as well. Louis and Frieda Glickstein of West Hartford, CT became the owners of the camp in 1952 and made several improvements to the property during the 1950’s including building of the “Jan-Mar” Theater Hall.

1960, Shelly and Sandy Hoch purchased Watitoh from the Glicksteins, and two generations of the Hoch family directed the camp over the next five decades, introducing many new activities and greatly expanding the camp facilities and camper base.

In January 2014, Britton and Drew Bitterman joined the Hochs as co-directors of Watitoh, carrying on the camp’s long-cherished traditions as one of the most highly regarded co-ed camps in the northeastern U.S with an extensive alumni network of campers and staff that is world-wide. In 2017 Billy moved into a Director Emeritus role returning to camp for some of his favorite traditional camp activities. 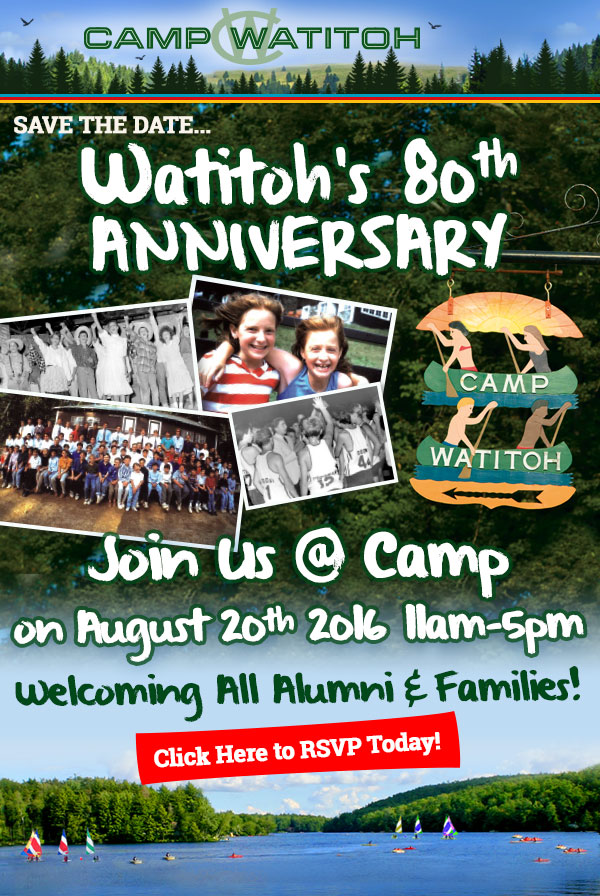 GOT IT! x close