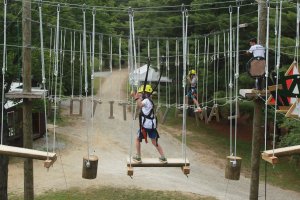 Week 2 has been an absolute blast! The weather has been amazing, activities are buzzing, friendships are blooming, and campers are happy!

Sunday was our first late sleep of the summer. Our new tradition on Sundays is to have our bagel breakfast al fresco to allow our Waiter 2 and TIC 2s to sleep-in! Big Sisters and Little Sisters played an intense game of Capture the Flag in the morning while the boys played Oval Games, Backyard Games, and more with their Big Brothers and Little Brothers. In the afternoon we had our Sports-a-Rama Apache Relay followed by our first Coed General Swim! Sunday night was socials! Our younger campers played the Rainbow Games, a hide and go seek type game where campers search for counselors dressed in colors while the “Greeny Meanies” run around erasing the colors that the campers find! The older campers had a “Black and White” themed social to kick off the season! 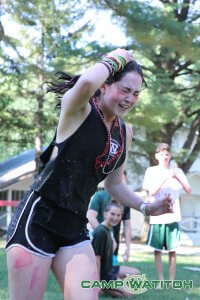 Monday was the 4th of July!! We had a normal program morning followed by our annual Red, White, and Blue Day afternoon. There were water relays, ultimate frisbee, slip n’ slide kickball, sponge dodgeball, and the TICS and Waiters participated in their marquee event called Chaos…crack an egg on their head, catch a tennis ball dipped in chocolate sauce, dig for pennies in oatmeal, bathe in an ice bath, and slip n’ slide were all part of this gross but amazingly fun relay race! The day concluded with our beloved Tom Carroll playing cover songs in the Hockey Arena and beautiful fireworks show over Center Lake!

Tuesday, our 5th grade girls went to Romaca for a kickball tournament while our girl’s tennis team played at Danbee! We made it through the day with no rain but had to move our Sports-a-Rama indoors for Sing Down. Our two hosts, Matt and Macy, called out a word and all of the teams had to sing songs with that word in the lyrics. It was a very competitive night in the Social Hall!

Welcome to the Zoo! Wacky Wednesday on Girls side this week was animal theme!  All the girls were dressed up for morning line-up! It was a big day of Intercamps including the annual Girls Romaca Swim Meet. Watitoh had a great turnout placing 3rd overall. We had a normal program day and ended with our Boys and Girls’ separate evening activities. The Boys had Superstars, where the counselors challenge each other in different events and relays around camp. The campers bet on who is going to win and can’t wait to see their counselors front and center! The Girls had their annual “Hunt the TIC” night, a huge game of hide-and-go-seek where each TIC is worth points. Congratulations to the bunk of Onondaga for their win!

Thursday night was our make-up Sports-a-Rama evening activity! The marquis event was the Junior Girls Basketball game on Boys Court! The whole camp crowded around to cheer on the girls. After, the boys had their first bunk challenges of the week. The winner of the all camp boys game of Ships of Sailors was former camper and now Tablesetter, Ben Fishkind! Congrats!!

Friday was our first all-camp campfire of the season! We had amazing performances by campers and staff as well as heard from the bunks of Shoshoni, Ojibwa, Mohegan, Seneca, and Shawnee sharing more about the Native American heritage that their bunk name represents. It was a great learning experience for all of us! And, of course, Britton and Drew ended the night with their traditional first campfire bedtime story, The Giving Tree, followed by some delicious s’mores for Nite Bite!

Tonight is our first musical of the summer, Beauty and the Beast! We cannot wait to see our Junior campers perform. They’ve been working so hard the last two weeks and Becca (Drama Director) and Cece (Music Specialist) are so proud of all of them! Check out the photos on Sunday!

Next week is full of some amazing activities: British Empire Day for the Girls on Sunday, Birthday Banquet and Silent DJ on Tuesday (no evening phone calls), Rebus for Boys, Gladiators for Girls and the best night of all, our traditional camp SING on Friday night! This mixed with regular program days, Intercamps, and so much more!!