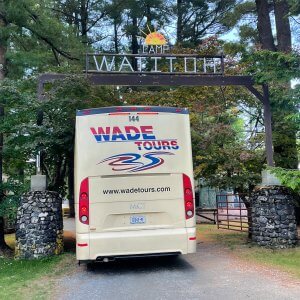 Wow!! What a first week it has been!! Our campers are having an incredible week and cannot wait to tell you all about it…

Saturday was Camper Arrival Day! The buses arrived and campers arrived by car and we kicked off the summer with bunk pizza parties followed by unpacking and a full afternoon of camp activities. Saturday night was our “Opening Campfire” on Den Hill where we introduced many of our staff, sang about our favorite frog, and new staff members, Jayden and Greg, introduced us to a belly laughing song about a Moose! The night ended with Britton and Drew reading a bedtime story. This year it was Oh the Places You’ll Go by Dr. Seuss.

Sunday was spent doing lots of “checks!” We had swim checks and lice checks and a full day of fun activities! One of our favorite camp meals, Turkey Dinner, was served for LUNCH! The campers all got to pick their first week hobby choice. Our Sunday night evening activity was called “Hi Guy” on Boys Camp and “Hi Girl” on Girls Camp…a camp tradition of introducing your counselors to camp and the counselors introducing the campers. Girls camp held this tradition at the campfire site and ended the evening with s’mores. Boys camp loved their night in the Hockey Arena where they had the chance to introduce all of the boys to each other! 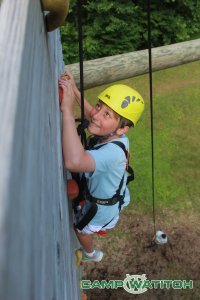 Monday was our first rainy morning at camp. But have no fear, a little liquid sunshine never hurts! By afternoon, the rain had past and the sun was shining. We were back to normal activities outside and General Swims for both our Boys and Girls’ camp. Monday night was separate Boys and Girls Camp traditional activities again! The girls did Bunk Chase and the boys did Hunger Games! Bunk Chase is an awesome ice breaker night for the girls. Each bunk gets to dress up and act out different ridiculous scenarios. What makes it the most fun is that they have to sprint back and forth from the gym to their cabin to change into crazy costumes and switch out people. The night ends in all of the bunks writing and performing a song all about their group! The Boys played Hunger Games. They were all divided into 12 teams with the goal of scoring points while protecting their “region.” Congrats to the “Black team” for their performance with zero points were scored against them. The first time EVER in Camp Watitoh history!

Tuesday was a GORGEOUS sunny day in Becket. The campers were BUSY all day long with a normal program day. It was our first day of golf lessons for those who enrolled. They loved going to the Miraval Resort for their lesson. Tuesday night we had our first Sports-a-Rama, a summer-long intramural league. The camp is split into four teams: Madrid Wildcats, Dublin Lobos, Skyline Bears, and the Glasgow Fighting Tigers. The teams are named after the two universities of the head coaches. Every field on camp was busy with friendly competition and good sportsmanship! A huge shout out to our Head Coaches and Bryan, our Athletic Director, for a strong opening night to the season. Tuesday night after Sports-a-Rama the Big Sister/Little Sister’s and Big Brother/Little Brother’s were revealed!! They were all so happy to meet each other!

Wednesday was our traditional pizza lunch and an awesome Auction Night! Each bunk was given $100,000 in Watitoh money and had the chance to bid on some great prizes.  Returning counselor, Drew and new Waterfront Staff member, Sadie were our auctioneer hosts! Some of the highlights were: a seat on Shawnee Porch for Watitoh Gardens, renaming an area of camp (our office is now called “Drew’s Dungeon!”), an overnight in the Cooking Cottage with treats and a movie, and so much more. Every bunk won a prize and we can’t wait to fulfill their winnings!

Thursday was the kick-off to our Intercamp season, the first tournament since 2019!  B6 girls headed to Camp Danbee for a Soccer tournament! We were really proud of their efforts, and they finished great! Thursday night on Girls Camp was the first annual REBUS activity. REBUS is a word scramble puzzle game where campers use clues to find letters around camp and unscramble a word or phrase. The phrase this year was GIRLS CAMP 22! The Boys had their annual Belly Flop contest and what a contest it was! Ranger and second generation Watitohan, Brody Cruz, took the title!

Friday was a day filled with Intercamps with the B10 soccer team going to Camp Lenox and our B8 Baseball team made the finals at the Greylock tournament! It was also the start to our Horseback Riding program! Friday night was our first Shabbat dinner followed by the first round of the Townsend Cup, a girls vs. boys game show night competition. We started the night in the Hockey Arena for Cranium and ended up finishing it Saturday morning in the Social Hall due to the spirit and activity going late. The girls took the win and can’t wait for the next Townsend Cup in a few weeks!

We are looking forward to the Camper Talent Show tonight, our first Socials on Sunday and the 4th of July on Monday!! We hope you have a great weekend and keep looking at those photos to get a glimpse of what’s happening in the 01223!