It was a picture perfect ending to an incredible summer!

Week 7 kicked off with the Apache Relay- an all camp race where each camper is tasked with a unique activity. Starting with the TIC Generals, Color War batons are passed from camper to camper, as they complete their task, until the very end when the Waiter General belly flops into the lake. Some of the other relay races are: shooting basketballs, making beds, climbing the rock wall, kayaking, making whip cream, walking in circles around the flower bed with trays of water pitchers, and so many more. The Tan Cronos won the Apache Relay. Monday night concluded Color War with the Tan Cronos performance winning SING followed by the Green Kraken overall Color War win! It was an exciting night and the score was almost too close to call!

Tuesday was our annual all-camp trip to Six Flags! Everyone loved Superman, Blizzard River (it was hot!), Skyscreamer, the game, the food, and hanging out together. When we returned, we enjoyed the annual Memory Lane tradition. Lucky for us, Director Emeritus, Billy Hoch, returned to camp to present a slide show of the history of Watitoh, including many familiar alumni parents, aunts, uncles, and siblings! We ended the night enjoying the first round of the Summer 2019 Highlight Video that photographer, Alexa, compiled. It was awesome!

Wednesday was CFL Day on Boys Side where they split into teams and played football all day! The girls had a “choose your own adventure” hobby day mixed with general swims! Wednesday night was the last Boys and Girls Separate activities. The boys had their “Waiter 2 Closing” while the girls had “Closing Campfire.” Both programs are a chance for the oldest campers of camp to share their memories and impart words of advice for the younger campers. There wasn’t a dry eye in either location! Thursday the boys completed their decathlon while the girls had Capture the Flag and plaque designing. Activities were cut short to get ready for the End-of-Summer Banquet. All dressed up, we sat at coed tables, and enjoyed an Asian inspired meal. Tennis, Swim, and Sailing Awards were presented as was the 2018 Camp Calendar by our Art Director, Erin. We are excited to display this beautiful wind chime in the space outside of the office.

Thursday night was an incredibly memorable performance of High School Musical! Catherine, Carter, Tatiana, and the entire cast and crew of the show were phenomenal! There were cameos by the Waiter Boys and a number of favorite staff. Congrats on an amazing show!

Friday was busy with packing, finishing plaques, and saying our goodbyes. After dinner,we had our final Tribe Time followed by “The Scroll,” a tradition where we review many of the activities and performances throughout the season. We closed out the summer of 2019 with our candle wish boats at the lake and our final singing of Friends. It was a very bittersweet night as we all knew that the next day we would see our families at home but we were sad to say goodbye to such an incredible summer.

Until next summer, Watitoh family…we will miss you! 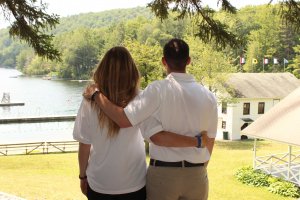