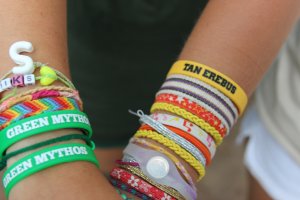 It’s hard to believe that we are at the end of this incredible summer. In a blink of an eye it was all over! The summer of 2017 has been filled with incredible memories, great adventure, wonderful friendship and personal growth. This week was no exception! 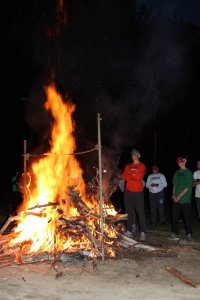 Color War 2017 broke last Friday and by Sunday, we were full-speed ahead with activities. The level of spirit around camp was at an all-time high! With rain in the forecast daily, someone was looking over us from above, because the weather held out and we were able to complete the entire Color War program. After a full day of sports on Saturday, Sunday morning was our All-Camp Track Meet. Sunday afternoon was filled with an activity session of alternative games: Kongpong, a Soap Box Regatta at the Lake, a Biatholon, Defend Your Castle, and Tennis Baseball were all on the agenda. Sunday night was our first ever Rope Burn. The TIC2 and Waiter2 campers were charged with the task of starting a fire (from wood that counselors had collected throughout the day) that had to burn through three ropes all at different heights. It was a tremendous sight to see and, even though Tan took the win, the Green fire was equally impressive! Monday morning was a normal sports activity session and, in the afternoon, was the most favorite Color War activity, the Apache Relay! Our female generals, Abbey and Sarah, started the race at the Watitoh gates and the male generals, Jake and Matt, ended the relay with a Belly Flop into Green Tag! It was an unbelievable event, with Tan ahead the whole time until the ever-changing waterfront activities, where the tables turned and Green took the victory! The Color War Sing was Monday evening with a new addition to the program…the camper art poster project. Three campers from each team worked alongside a counselor to create a poster. They were awesome! With a tough decision for the judges, Tan took first place in the Sing and won the 2017 Olympiad games. No matter who won, it was an incredible three and a half days and all of our campers and staff felt like winners! A huge thank you to all of our staff who worked tirelessly behind-the-scenes to make this event happen and to the Generals and the Chiefs of Staff who were the front-men and women who gave their heart and soul to camp. 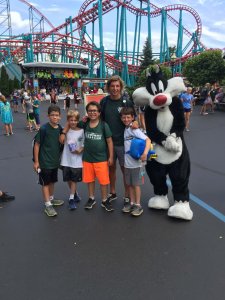 Tuesday was the annual trip to Six Flags! Campers enjoyed their day, riding the rides, playing games, and eating their way through the park. Tuesday night was the annual Memory Lane presentation. Billy Hoch entertained us all with a slide show from the early days, followed by a “round-up” of the 2010-2016 videos and ended with the grand finale of the 2017 Video made by our favorite camp photographer, Sami Steinkamp. It was awesome! We’re looking forward to the last week photos being added and presenting the final version at the New York reunion in November.

Wednesday was NFL Day on the Boys Camp and a “choose your own hobby day” on Girls Camp. Wednesday night was separate activities. The boys had “Waiter 2 Closing” where campers and staff share about their years at camp and pass the torch to the younger campers. The girls had their “Final Campfire” where the TICS hosted a program of old sing songs, camper talents, and the opening of their time capsule from their Debs summer.

Thursday was a Plaque making day along with our last General Swims and the staff soccer game: North America vs. The World! In keeping with tradition, “The World” won! Thursday night was banquet where we recognized campers for their swim improvement, sailing accomplishments, and drama accolades. In addition, we gave Joe Menzyk, our Head Chef for 30 years a Camp Watitoh chef coat to aknowledge his years of service to camp. Last but not least, we made a special dedication to Billy Hoch, and renamed the Boat House in his honor. It was a special dinner all-around. The Senior Camp play, “Once on this Island,” followed shortly after! The campers did an incredible job with a short amount of time and really displayed some amazing talent. A huge shout out to the cast, Carolyn, and Carter for their hard work and to the Art department for their set design!

Friday was the dreaded packing day!! Cleaning, folding, organizing, and packing took up most of the day with a water ski show mid-afternoon! Friday night was the annual “Scroll” where we highlight events from the summer on stage and recognize campers and staff for the Decathlons and for demonstrating leadership on Boys and Girls camp and during Color War. The evening ended with the entire camp at the waterfront to set free their wishing boats and sing “Friends” one last time as a camp for the summer of 2017!

It was a tremendous end to what was a fantastic summer! We are so grateful to all of our parents for sharing their children with us and for giving them this gift of camp. We can’t wait to see all of you in the upcoming months and wish you a wonderful rest of the summer. 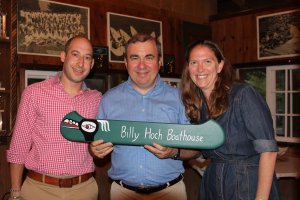