Week 5 came and went like a shooting star! We welcomed our wonderful three-week friends to camp and introduced new campers to the routine of camp and the Watitoh traditions!

Our week started with Sunday being a Monday and vice versa…So, a late sleep on Monday was followed by a full rainy day in Becket. The morning was spent practicing for MTV Night on the girls side and indoor gaga and dodgeball for the boys! In the afternoon we had indoor rainy day hobbies like Yoga, Pool Noodle Hockey, Brain Teasers, Dance, a Jam Session, and more! The afternoon concluded with an all-camp Sports-a-Rama competition of the Alphabet Game followed by age group socials at night. Despite the weather outside, we were active and having a great day!

Tuesday, our Rangers and Juniors hosted a Mah-kee-nac Intercamp filled with basketball and football. They had a great time hosting and playing ball! Tuesday night was an all-camp movie night where they watched Camp Nowhere and loved the downtime. Wednesday was a special afternoon for the TICS and Waiters. In the afternoon, they shared Watitoh with their peers from Project Morry. Forty of their campers joined ours at the Adventure Course, on the basketball and volleyball courts for a great day. The TICS hosted them for a picnic dinner on the oval and began forging friendships with kids their age who love their camp the same way our kids love Watitoh!

Wednesday night on Girls camp was MTV Night, a long standing tradition where the campers lip sync and choreograph a dance to a favorite song. There were some unbelievable acts. A tie for first place between Cayuga and Onondaga rounded out the event. While the girls were dancing, the boys were running…to hunt the counselor! A favorite on boys camp, they all dressedin black to find their counselors who were worth all different point values. the day in Boston, visiting Faneuil Hall, the aquarium, taking a boat tour, and dining at the Hard Rock Café! They had a blast! On camp, we encountered some more “liquid sunshine” but maintained the majority of a normal program day! The evening was a throwback to the “Matching Game!”

Friday, our Art Hobby made a trip to Mass MOCA, a modern art museum in North Adams. They had studied the artists on display and returned to camp to create art in their same genre. Friday night was World Records Night at Watitoh where we broke the record for many things including a four-man pushup, hula hooping, and headstands!

Saturday, our Senior girls enjoyed a rehearsal on the lawn at Tanglewood while, back at camp, we welcomed 30 prospective campers and their families for Dream Day! It was a busy day at camp sharing our warmth and tradition with future campers. Saturday night was an unbelievable Staff Talent Show with the likes of a “boy band,” a performance by our photographer, Sami and her co-counselor Brooke to “For Good” from Wicked, a telepathy presentation by Kat and Babs and an incredible poetry reading by Caleb, our arts specialist. Not to mention some amazing dance routines by some of our female staff and other singing performances by Carolyn, our Drama Director! Sunday was a gorgeous day at camp. The boys played Quidditch while the girls indulged in Capture the Flag. The afternoon was spent at the Carnival, eating sno-cones, cotton candy and dunking their favorite leadership team members at the Dunk Tank. The pictures tell it all!  The evening activity was costume social where campers and staff got dressed up — it felt alot like Halloween in July!

All in all, it was an incredible week and now…Color War is in the air! Every day there is a fake break and campers and counselors are on their toes waiting for some sort of game-changing event to start the games!! Stay tuned for next week’s update! Their MAY OR MAY NOT be a lot to share!!! 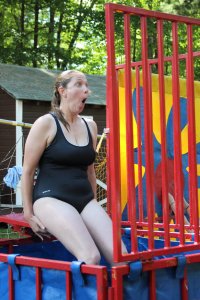