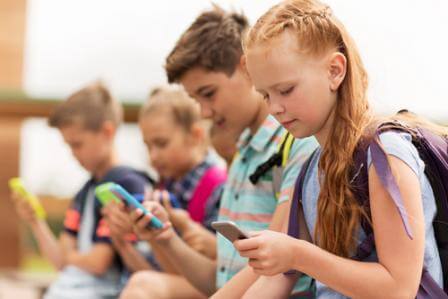 Taking a “Time Out” from being a “Phone Addict!”

In today’s day and age, there are many reasons to choose sleepaway rather than the plethora of options for kids summer activities. At Watitoh, we believe that coming to camp each summer allows children the opportunity to…
In the below NY Times article, Ana Homayoun, author of a new book, Social Media Wellness, talks all about phone addiction and how parents can help their kids navigate the world of smartphone use, sharing not only the challenges but the benefits of these devices. Please click on the link below to read the article and we recommend reading Ana’s book which offers an even deeper understanding of our kids today.
Camp really is the last place that kids get an extended “time out” from their phones. We feel grateful to offer the opportunity to our campers every summer!
——NY TIMES ARTICLE—-

Is Your Child a Phone ‘Addict’?

On the heels of two large Apple investors urging the company to address kids’ phone addiction, many parents may be wondering: How do I know if my child is addicted to his or her smartphone? And how can I prevent problematic overuse?

There are reasons for concern. A 2016 survey from Common Sense Media found that half of teenagers felt addicted to their devices, and 78 percent checked their devices at least hourly. Seventy-two percent of teens felt pressured to respond immediately to texts, notifications and social media messaging. A 2015 Pew Research report found that 73 percent of 13- to 17-year-olds had their own smartphones or had access to one, and 24 percent said they were online “almost constantly.”

I have spent the past 15 years helping teens with organization and time management. Many parents of kids I work with are conflicted about their teens’ smartphone use. They appreciate the convenience of having access to their children and the potential safety benefits. And, in an age of social media socialization, teenagers use messaging apps to stay in touch with friends and make social plans, some of which can be positive.

When a high school student I work with broke his neck playing football this past fall, his smartphone became a crucial link not just to friends, but also to others dealing with similar injuries. After watching videos of others documenting their recovery on YouTube, he connected with some via Facebook Messenger and began conversations he found “incredibly helpful.

Instead of becoming overly fixated on teens’ smartphone use in general, it is important to think about “what are the applications on the smartphone and how is your particular child using the applications on that smartphone,” said Katie Davis, assistant professor at the University of Washington and co-director of the UW Digital Youth Lab, whose research explores the role of new media technologies in young people’s personal, social and academic lives. Parents trying to monitor use can have difficulty distinguishing abusive behavior from appropriate use, especially since teens use their devices for both schoolwork and free time, often simultaneously.

For some teens, the constant potential feedback loop from notifications and messaging might create a fear of missing out, or FOMO. And although there is currently no official medical recognition of “smartphone addiction” as a disease or disorder, the term refers to obsessive behaviors that disturb the course of daily activities in a way that mirrors patterns similar to substance abuse.

Here are some questions to ask: Does your teenager’s mood suddenly change and become intensely anxious, irritable, angry or even violent when the phone is taken away or unavailable for use? Does your teen skip or not participate in social events because of time spent on the phone? Another red flag is spending so much time on a smartphone that it affects personal hygiene and normal daily activities (most notably, sleep). Lying, hiding and breaking family rules to spend more time on a smartphone can be cause for alarm, said Hilarie Cash, a psychotherapist and the chief clinical officer at reSTART, an internet addiction rehabilitation program outside of Seattle.

In my work with students, I’ve found that even teenagers who want to curb their phone use may find it difficult to self-regulate without parental guidance. Creating daily and weekly offline time as part of the family routine is helpful, and finding a way to have a once- or twice-yearly extended period of time off — at a summer camp or outdoor expedition without Wi-Fi, or on a family trip — may provide the reset teens need to break negative habits.

South Korean researchers developed and tested a 10-item questionnaire to determine adolescent smartphone addiction. The brief questionnaire, published in the journal PLOS One in December 2013, asks users to answer statements like whether they have missed work because of smartphone use, have had a hard time concentrating in class because they were thinking about their phones and whether they became impatient when not using a smartphone.

For parents thinking of getting their kids smartphones, providing incremental and compartmentalized access can help establish good habits and prevent problematic dependency. Parents sometimes hand down their old iPhones as a first phone for a child in elementary school. I encourage parents to get their kids flip phones first, and wait until they have developed good overall habits before giving them a smartphone.

Just as kids learn to ride bikes with training wheels or get junior licenses when they learn to drive, kids shouldn’t be expected to manage their first smartphones all by themselves. Fortunately, there are ways to manage use and help kids develop better tendencies, and much of it requires a delicate balance of parental modeling and involvement.

Taking the time to discuss appropriate use, establish guidelines and come up with a family agreement before kids get a phone is ideal, because it can be harder to put rules in place afterward. Family agreements can include rules about when and how the phone may be used, and potential consequences for broken rules. Agreements are more likely to be successful if they are followed consistently and revisited frequently as kids grow older and new apps become available.

For parents of teens who have smartphones, making the effort to understand how, where and why kids are spending time on their phone is critical.

It can be helpful to think about imbalances over a span of time rather than on a single evening or weekend. After all, binge-watching a television series on a smartphone while feeling sick or heartbroken isn’t the same as lying about phone use over an extended period of time. An app like Moment can help track usage and display the time spent in each app.

Take a Time Out

Apple’s Family Sharing and Google Play have settings to help parents monitor use, and most phone carriers have their own parental control options. Devices like Circle and apps like OurPact give parents the ability to automate access, disable access to certain apps after a certain hour and build in structured time off to promote rest. The psychologist Larry Rosen, who has researched technology and the brain and is a co-author of “The Distracted Mind: Ancient Brains in a High-Tech World,” said one of the most important steps is to remove the phone from the bedroom at night.

Be a Role Model

Of course, parents trying to set healthy guidelines for smartphone use may themselves be struggling with similar issues: The 2015 Pew survey found that 46 percent of American adults believed they could not live without their smartphones. Teens aren’t the only ones we need to worry about when it comes to smartphone addiction — adults should consider their habits as well.

Ana Homayoun is the author, most recently, of “Social Media Wellness: Helping Teens and Tweens Thrive in an Unbalanced Digital World.”

Learn more about Ana Homayoun by visiting her website: http://www.anahomayoun.com/home/