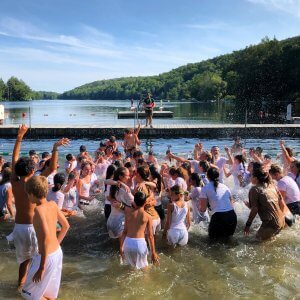 Time sure does fly when you are “living the dream” at Camp Watitoh! Week 6 has been a whirlwind of special events, evening activities, and an awesome start to Olympiad.

Monday was a typical Watitoh day with some excitement for the Boys Orienteering Program! Ten boys and 3 staff embarked on an overnight camping experience at October Mountain State Forest. It was an exciting first for boys camp and they really loved pitching their own tents, cooking over the campfire, and exploring the state forest! Monday night was a typical Sports-a-Rama night- the last of the season! 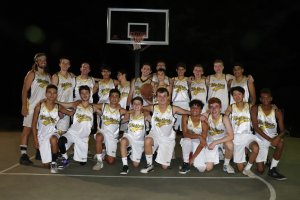 Tuesday was filled with all sorts of excitement for Watitoh Gardens! This long standing tradition of the Waiters vs. the Staff in a classic game of basketball for the entire camp to watch was on the horizon and you could feel the energy in camp all day. Campers were making signs, boys were sweeping the court, and the teams were resting for the night’s activity. We welcome four alumni referees to officiate the game and the Upper Senior Boys were ready for their score keeping responsibilities. The game was the closest we’ve seen in a long time. Both the Waiters and the Staff teams really showed up to play and many times throughout the game, it was anyone’s to win! In the end, the Staff came out on top with a 3 point lead of 63-60. Zach Unger was the Camper MVP with an unprecedented amount of 3-point shots while Josh Simkovitz was awarded the same title for the Staff for his ability to motivate the team on and off the court. The night ended with an awesome FAKE BREAK organized by the past Chiefs and Generals of the Green team.

Wednesday we introduced a rebranded evening activity called Watitoh Derby! We all got dressed up in “Derby-chic” with our “ascot” inspired hats, for a night at the races. Campers and counselors had the opportunity to act like horses and race around the Social Hall in creative races. Everyone had the chance to bet on the “horses” that they thought had the best odds! It was a very interactive and exciting night!

Thursday and Friday were typical days of programming. Thursday night was a new evening activity called International Invasion! Picture all-camp Capture the Flag with a lot of twists and turns! It was very exciting watching the entire camp running around in coed teams with many of the flags of the world represented. Friday night we had an all-camp campfire. 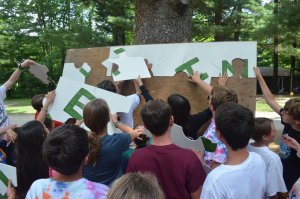 On Saturday at lunch, the Head Table quieted the camp with a cheer, followed by, “Knit one pearl to, everyone go back to your bunks for a clue!” The entire camp ran out of the Mess Hall and back to their cabins to find a “Pirate themed” inspired clue. Each cabin ran around camp finding clues until they found a puzzle piece. They brought the puzzle pieces to the Oval and collectively put together an enormous puzzle that gave the clue to move everyone to Den Hill. At the waterfront, Pirates were fighting on the “H Dock” until “The Prophet of Points” appeared out of the water declaring “Egad this is Olympiad!” It was very exciting as papers flew and green and tan ping pong balls flew from the air!

The last three days has been spent in awesome competition between Green Kratos and Tan Hades. Land sports, sailing, rock climbing, cooking, chess, art, and more have all been displayed throughout this Olympiad. Both teams have brought the spirit and upheld the tradition of healthy competition throughout. In the final event before the SING, the Tan Hades won the Apache Relay! The entire team jumped into the lake with enthusiasm celebrating their win! 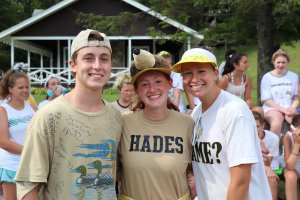 Tonight we experienced one of the most incredible traditions at Watitoh, the Olympiad Sing and Art Presentation. Both teams sang their hearts out to beautiful songs and both presented camper banners that were creative and demonstrated amazing talent. A huge congratulations to GREEN KRATOS for winning SING and to TAN HADES for winning Olympiad 2019! We are so proud of all of the participants and especially the leadership of both teams for their amazing efforts over the past few days!

Tomorrow we are off to Six Flags and looking forward to Memory Lane, Final Banquet, Mamma Mia, Closing Campfire and the Scroll and of course, our closing ritual of Candle Boats.