After a great ZOOM Visiting Day weekend, we had a busy and HOT week at camp! We also had a grand adventure with Lighthouse Films returning nine years after our “Living the Dream” video was produced to film some of the new things that have been introduced in that time and update some of the footage. All of camp was involved and the campers loved being featured! We can’t wait to share the updated video with all of you this winter!

Monday was a Sunday at Camp Watitoh…and a welcomed relaxing rainy day! We had a late sleep, girls and boys separate activities in the morning with a movie in the afternoon. That night we played Name that Tune in the Social Hall!

Tuesday and Wednesday were both classic “Watitoh days” with beautiful weather, Intercamps, and a SURPRISE shaving cream fight!! If youmissed the pictures, check them out!! Wednesday night girls had Gladiators where the counselors challenge the campers to all sorts of fun games: slip n’ Slide Tug-of-War, Earth Ball, Sumo Wrestling with pillows, and more! Boys camp introduced a new activity called “Game of Games.” Think how fun it was to pour Orange Soda, apple sauce, and a full Sundae with chocolate sauce, sprinkles, and a cherry on top of their counselor’s heads! 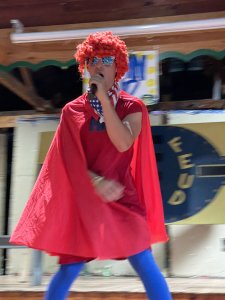 On Thursday, our Berkshire Regatta team returned to Camp Lenox for the annual sailing race. We had a great turnout and are very proud of the group of campers who worked so hard in hobby all week to compete! Thursday night was the very popular second round of the Townsend Cup. The Boys vs. Girls Cabin Feud, hosted by camp favorite, Ben Hecht, was a heated competition. You cannot even imagine the energy that radiated from the Social Hall! In an unbelievably close match up, Girls Camp took back the Townsend Cup! We can’t wait to see what happens next year!

On Friday, we sent a climbing team and dance team to Taconic for Intercamps. They all had a blast and performed their hearts out! Friday night was a traditional campfire with more “repeat after me” songs from dynamic duo, Jayden and Greg, a performance from some of our Debs, and a beautiful music duet from our Music Hobby. We also had the chance to hear poems and learn traditions about the Cayuga, Oneida, Apache, and Onondaga tribes.

Tonight was an all-camp favorite, Las Vegas Night and Dancing with the Staff. Poker, Roulette, Candy-Grams, Blackjack, the Marriage Booth and more filled the Social Hall. In the annual Dancing with the Staff, six separate pairs of staff and camper performed in front of the camp. It was Gus and Ivy took 1st place with their performance of Baby Shark!

Our last three weeks are already in high gear, and we are looking forward to a lot of great things this week: Costume Social, Watitoh Derby, MTV Night, Hunt the Counselor, a campfire, and more!!! Keep looking at those photos to see what’s happening every day!